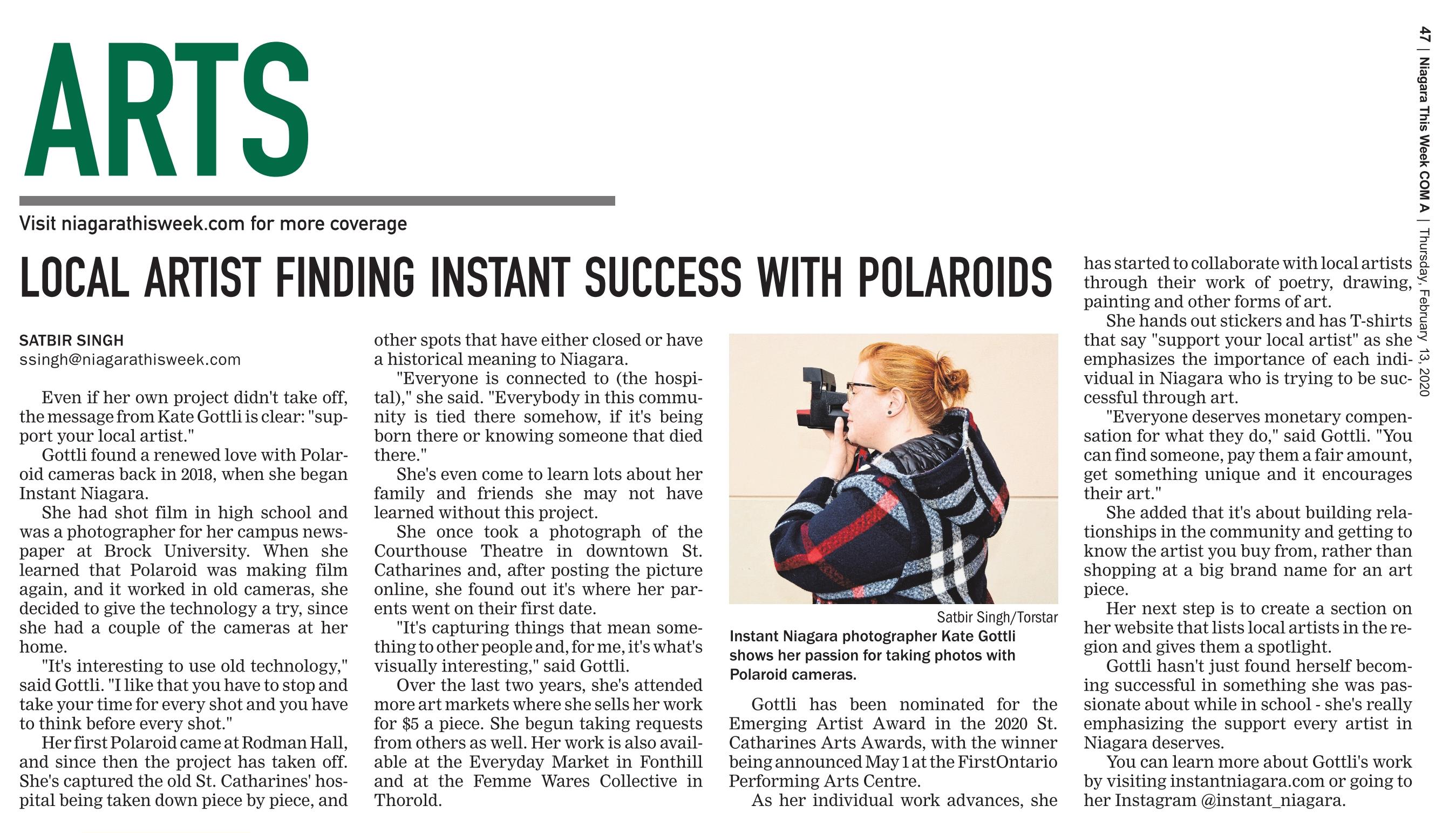 Instant Niagara is a project that has been cultivating for my entire life, I just didn’t realize it until recently.

I grew up in Beamsville and over the past 35 years there has been a huge spectrum of change in my hometown. While many of the farmer’s fields and brush has been paved and filled with subdivisions there are still quite a few wayfinding scenic markers and guardposts that have seen minimal change. Even today I still have some favourite barns, buildings, and trees that are seemingly untouched or disinterested in the growth and progress happening around them.

In 2009 I eloped in New York City, choosing the Brooklyn Bridge as a backdrop for our wedding photos. I wanted an ‘iconic’ location that I would recognize every time I saw it in movies, on TV, and in magazines and artwork. There was something about the idea of being able to randomly encounter the happiest memories of my life that just seemed so romantic to me. It was an intentional setup for future nostalgia.

In recent years I was fortunate enough to discover the “Niagara Scenes” print series that the St. Catharines Standard commissioned in the early 1980s. Artist Ben Babelowsky did a series of 12 local Niagara landmarks that are beautifully captured and immediately recognizable. It induced the same love and excitement as seeing the Brooklyn Bridge. I have been collecting art of local landscapes and landmarks ever since.

There are a few vintage cameras from various family members that I have always kept on display as décor in my home. In 2018 I realized that polaroid was creating film that actually worked in their (various) vintage cameras. I took a gamble and bought a few packs of film just to see if I could get anything out of it and was inspired with the results. The first photos I took with an old Sun 600 were at Rodman Hall and I realized that while the building itself was incredibly recognizable and iconic, the polaroid medium can make it very difficult to determine WHEN the photo was taken.

Instant photos have been around since the late 1940s and depending on the subject matter that brick alley wall with the hand-painted sign may have had a lifespan even longer than that.

I started taking photos, making each one available for purchase for $5. My hope is that people would buy a photo or two on impulse because they’re reminded of a special place or time. The photo would live on a fridge or a bulletin board, or make its way into a box or drawer. In 15 years or so it will be rediscovered when a piece of furniture is moved or a closet gets cleaned out. …It’s an intentional setup for future nostalgia.

Want to know even more??? You can also check out this article written about Instant Niagara in October 2019!